Today 3,700 people will die on the world’s roads. The same will happen tomorrow, and in all the days that follow.

According to a new report by the World Health Organization, many who die will be children and young adults. For people aged 5-29 years, there is no greater threat to their lives than a road traffic crash.

Globally, more than half of victims of fatal crashes are pedestrians, cyclists and motorcyclists. In other words, they are people who are not travelling in cars. Most would not even be able to afford one. Yet most transportation systems around the world have been designed for motor vehicles. The price we have paid for mobility is unacceptably high.

It is time for governments to muster the necessary political will and adopt a whole-of-government approach across many sectors to prevent these tragedies and prioritise safer and healthier transportation.

Ignorance about what to do is no excuse because strategies are known and have been proven to prevent road traffic deaths and injuries in many countries.

They include better legislation around risks such as speeding and failing to use seat-belts; safer road infrastructure like sidewalks and dedicated lanes for cyclists and motorcyclists; improved vehicle standards such as those that mandate electronic stability control and advanced braking; and enhanced emergency care services.

We all have a role in making roads safe. This includes each of us as individual road users as well as in our capacities as heads of international agencies and foundations, researchers and academics, civil society advocates and employers.

Given that a considerable proportion of road traffic crashes are work-related, businesses which operate large fleets play a significant role. Through fleet safety programmes, employers ensure that their employees follow good road safety practices and that the vehicles that form part of their fleets are well-maintained and equipped with the latest safety features.

Such efforts make a significant contribution to global road safety. They also help to ensure a safe work environment and save companies huge costs in terms of preventing employee absenteeism and injury claims. Through periodic road safety campaigns, their reach often extends beyond employees and their families to the broader communities in which they operate.

In terms of the Sustainable Development Goals, which governments agreed in 2015, ensuring safety on the roads will facilitate achievement not only of the targets linked to road safety, but also to those associated with employment, environment and education, among others. They are all predicated on being able to move around in safety.

Director of the Department for the Management of Noncommunicable Diseases, Disability, Violence and Injury Prevention, World Health Organization www.who.int 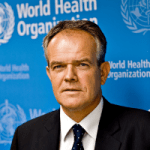 Dr Etienne Krug is director of the Department of Management of Noncommunicable Diseases, Disability and Violence and Injury Prevention at the World Health Organization in Geneva, Switzerland.

In this position he has overseen the development of major intergovernmental resolutions and ground-breaking world reports, the implementation of major innovative development projects, and preparations for large global events. He chairs the International Organizing Committee for World Conferences on Injury Prevention and Safety Promotion and the United Nations Road Safety Collaboration and is member of the Editorial Board of several scientific journals.

Before joining WHO, Etienne was an epidemiologist at the Centers for Disease Control and Prevention in Atlanta, USA. Prior to that he worked in war torn countries for Médecins sans Frontières and the United Nations High Commissioner for Refugees.

He holds a degree as medical doctor from the University of Louvain in Brussels, Belgium, and a Masters Degree in Public Health from Harvard University and has received many awards.